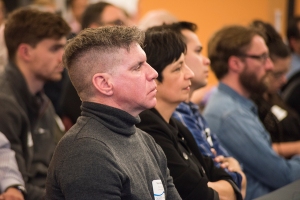 The meeting was held at Grand Central Tech – a great space at 335 Madison Avenue where Facebook once had New York City offices – and featured a presentation on IoT and Fog Computing by Cisco’s IoT innovator, Maciej Kranz.

This was the first IoT Central event I attended where fog computing was discussed. It’s becoming a hot topic and based on the premise that the cloud isn’t enough as IoT deployments begin to explode and more real-time data processing power is needed at the edge. – Russ DeVeau